Are there really giant rats the size of cats living in some parts of the United States?  Yes, it is true.  In fact, some of these giant rats are actually the size of small dogs.  The monster rat in the picture at the top of this article was killed by a maintenance worker at a housing project in Brooklyn, New York.  The rat was measured to be more than 3 feet long and the maintenance worker killed it by spearing it with a pitchfork.  Could you imagine a rat of that size crawling around in your basement?  Unfortunately, reports of giant rats the size of cats are becoming increasingly common and they are coming in from all over the world.  So where are all of these giant rats coming from?  Well, many believe that these are actually Gambian pouched rats.  Before they were banned, a lot of people would import them into the United States as pets.  Others believe that there are other explanations for the origin of these bizarre rodents.  Wherever they are coming from, they sure are creepy and they appear to be spreading.

Down in the Florida Keys there has been a major problem with giant rats lately.  The following is from a recent Fox News report….

Giant Gambian rats are reportedly running wild in the Florida Keys … and these aren’t your average rats. Some can weigh up to a whopping 9 lbs.

Scott Hardin, an exotic species coordinator, told Jon Scott today that his belief is that a breeder likely released the massive animals in the Keys around ten years ago. Then, four or five years later, neighbors started noticing the rodents.

“You wouldn’t mistake it for any other rat you’ve seen before,” Hardin said of the species, which can get as large as an average house cat.

What would you do if you found a 3 foot long rat crawling underneath your kitchen table?

Just check out the picture below.  Would you have the courage to battle a monster that is this big?…. 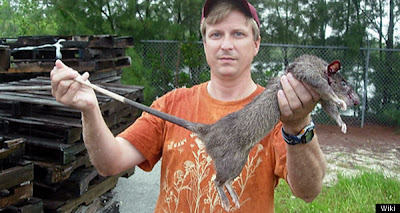 But it is not just the United States that is having a problem with giant rats the size of cats.

Across the Atlantic there have been disturbing reports of monster rats as well.  Just check out the following video news report from the UK…..

In some instances, giant rats can actually be very dangerous to humans.

In particular, some giant rats appear to have no fear of attacking human infants.

In fact, it has been reported by the Daily Mail that two babies were actually eaten by giant rats in South Africa last year….

Giant rats as big as cats have killed and eaten two babies in separate attacks in South Africa’s squalid townships this week.

Lunathi Dwadwa, three, was killed as she slept in her parent’s shack in the Khayelitsha slum outside Cape Town and another girl was killed in Soweto township near Johannesburg the same day.

I can’t even imagine what it would be like to discover that your child has just been attacked by a giant rat.  Hopefully nothing like that will ever happen in the United States.

But pictures of very frightening giant rats are being posted on the Internet from all over America.

New York seems to be a hotbed for giant rats, but they are being discovered in other parts of the U.S. as well.

If you find one, it may not be easy to kill.

For example, the photo below is of a monster rat that was discovered at a Foot Locker in the Bronx.  Let us all hope that we never find anything like this in our own homes….