A mummy was recently found in Peru that simply does not fit in with the version of history that we have all been taught. Scientists believe that the mummy was a child less than two years old when it died, but there are many things about the mummy that are definitely not human. So could this actually be a Nephilim mummy that has been found down in Peru?  I have written previously about some of the giant footprints and giant skeletons that have been found all over the world.  Could this skeleton that is now on display at a museum in Peru be one of the strongest pieces of evidence yet that giants once walked the earth?  The video that you are about to see is absolutely shocking.  Many consider these giant skeletons to be one of the greatest unexplained mysteries in the world, and hopefully this latest discovery will spur more research in this area.

Here is what we know about this mummy….

-It was found at a site that was once in the very heart of the Incan civilization.

-It is now being displayed in the Ritos Andinos Museum in Andahuaylillas.

-The mummy is approximately 20 inches tall.

-The head of the mummy is oblong in shape and is way, way too large to be human.

-The eye cavities are also way too big for a human.

-Anthropologist Pablo Bayabar had the following to say about the size of the head and the teeth that were found inside the mouth….

“Children’s heads are proportionally bigger than their bodies. Here we have two points. First, the fontanelle is open, which usually closes at 31 months. And it has molars that usually appears between approximately 13 and 19 months. So we are looking at a child under two years old with an enormous head.”

The director of Ritos Andinos Museum, Renato Davila, says that there are quite a few things about this skeleton that simply are not human….

“The lower front part of the jaw has a kind of fin that doesn’t exist in any ethnicity in the world. The opening at the top of the head also calls for attention, and it has wisdom teeth and molars that also don’t coincide with any human being.”

So what in the world is this thing?  Watch the video posted below and decide for yourself….

Could the history that we were taught in school be a total fraud?

Is there much more to the ancient history of the earth than we are being told?

In the book of Genesis, it tells us that a race of giants known as “the Nephilim” roamed the earth in the days before the Flood….

The Nephilim were on the earth in those days—and also afterward—when the sons of God went to the daughters of men and had children by them. They were the heroes of old, men of renown.

The ancient book of Enoch, which is quoted in the book of Jude in the Bible, goes into much greater detail about the giants that once lived on our planet.

In Enoch 6:1-3, we are told that fallen angels came down to earth, took wives and had children with them….

Those children were the Nephilim.  In the end, the Nephilim were wiped out by the flood of Noah.

But the Scriptures also tell us that there were giants after the flood as well.  The following is from an article on The Return Of The Nephilim Blog….

In Genesis 14:5 it tells us that the Rephaim were involved in wars in the promised land during the time of Abraham….

Not only that, but in Genesis 15: 18-21, God told Abraham that the land of the Rephaim was part of the land that God was giving to him and his descendants….

In fact, in the book of Joshua it tells us that Og the king of Bashan was one of the Rephaim.  For example, Joshua 12:4 tells us this….

And the territory of Og king of Bashan, one of the last of the Rephaites, who reigned in Ashtaroth and Edrei.

that is, the whole kingdom of Og in Bashan, who had reigned in Ashtaroth and Edrei and had survived as one of the last of the Rephaites. Moses had defeated them and taken over their land.

Not only was Og one of the last survivors of the Rephaim, but he was also an incredibly large man.  The Scriptures tell us that his bed was 9 cubits (approximately 13 feet) long.

Now what kind of man would need a 13 foot long bed?

A giant – that is who would need such a long bed.

In fact, we read in the Bible that giants still existed during the days of King David.

Most people have always assumed that Goliath was not actually a “real giant”, but now a lot of people are realizing that the Bible meant exactly what it said.

There are many other ancient sources that speak of giants as well.

So why are we never taught about them in school?

Could it be that anything that does not fit in with the “accepted version of history” is censored out?

In this day and age, it is absolutely imperative that we don’t rely on “the system” to educate us and that we all learn to think for ourselves.

There is much more to history than we have been told.

Keep on seeking the truth. 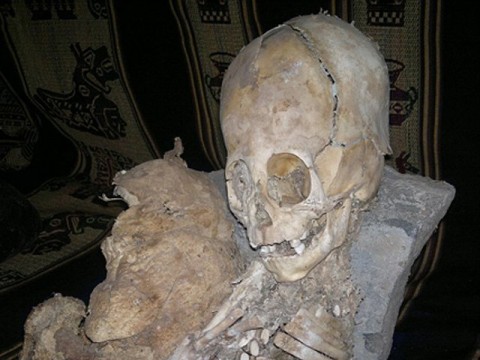