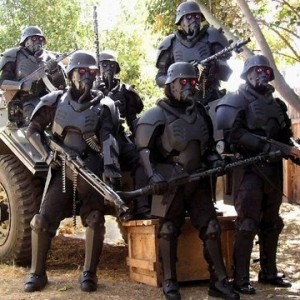 The face of the U.S. military is radically changing.  Technology is evolving faster today than ever before, and the U.S. military is determined to be at the cutting edge of applying futuristic technology.  A lot of things that once were only in the world of science fiction are quickly making their way into the U.S. military.  In fact, there are some projects in development that are so bizarre that it is kind of hard to believe that they are real.  After all, creating soldiers with superhuman strength and endurance using pharmaceutical drugs, outfitting soldiers with exotic prosthetics and mechanical exoskeletons, implanting microchips directly into the brains of soldiers to give them an advantage in battle and editing the DNA of soldiers to make them the ultimate killing machines all seem more like something out of a really bad summer movie than real goals that the U.S. military should be pursuing.

The Defense Advanced Research Projects Agency, or Darpa, recently released its budget for the upcoming year.  DARPA has a reputation for bizarre research projects, and this year they definitely are not disappointing us.  DARPA’s new budget includes money for “super soldiers” with “edited DNA” and implantable microchips.  DARPA explains one application for these new technologies this way….

On the other end of the size scale, a primary goal is to apply microsystem techniques to soldier-protective biomedical systems. One example is an in-canal hearing protection device that will provide enhanced hearing capabilities in some settings, but be able to instantly muffle loud sounds of weapons fire. This one example will improve inter-personnel communications and at the same time drastically reduce the incidence of hearing loss in combat situations. For these examples and many more, the goal is to bring exceptionally potent technical approaches to bear on biological and biomedical applications where their capabilities will be significant force multipliers for the DoD.

But DARPA is not alone in pursuing these bizarre new technologies.  According to the U.S. Army’s Future Soldier Initiative, the soldiers of the future might boost their brains with drugs and prosthetics, augment their strength with mechanical exoskeletons, and have artificially intelligent “digital buddies” at their beck and call.

The goal of these drugs, prosthetics and exoskeletons would be to give soldiers “superhuman” abilities that they would not otherwise possess.  For example, the ability to effortlessly carry a very heavy weapon into battle would be a significant advantage on the battlefield.

Some of these exoskeletons are absolutely amazing.  Just check out the following video news report which contains footage of a soldier demonstrating a prototype of an exoskeleton…..

But will these changes go too far?  In the pursuit of creating “ultimate killing machines”, will we create monsters who show no hesitation and no remorse when killing other humans?  Will we create beings that are half human/half machine that have no place in society once their battlefield careers are over?

The future is going to be a very strange place, there is for certain.  Let us hope that our military leaders think things out very clearly before implementing these ideas.  Sometimes changes that are thought to be “good” can have very bad, and very unintended, consequences.