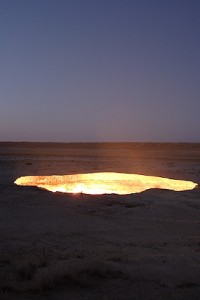 There is place in Uzbekistan that is known by locals as “The Door to Hell”. It is located outside of the small town of Darvaz. It is literally a massive pit that has been burning night and day for the past 35 years. So where did it come from? Well, 35 years ago, a team of geologists was drilling for gas. During the course of their drilling, the team discovered an absolutely gigantic underground cavern that was filled with gas. The team of geologists reportedly decided to ignite the entrance so that no poisonous gas could escape from the hole. Since then, the hole has burned for 35 years straight without stopping. The truth is that nobody really knows how many tons of gas have been burned over the course of 35 years or how much gas is left to be burned. It just keeps burning and burning and burning and burning.

The reality is that this hole is really creepy and it is easy to see why it is called the door to hell. Just check out this video….