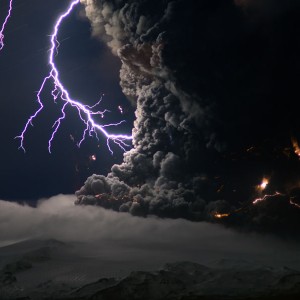 What in the world was flying around in the ash cloud above Iceland’s erupting volcano?  On April 18th, 2010 a formation of flying objects was captured on video hovering above Iceland’s Eyjafjallajokull volcano as it was erupting.  So what in the world were those flying objects?  Were they “birds” as many in the mainstream media are reporting?  Were they UFOs?  Will this be yet another of the unsolved and unexplained mysteries that we don’t have answers for?  Whatever the objects were, they obviously possessed intelligence as they were flying very deliberately in a “V-shaped” formation.  Unfortunately, we may never get the answers to the questions that we are asking.  But doesn’t it seem interesting that flying objects that look like UFOs keep showing up at so many important earth change events?

The video posted below contains footage of these objects hovering near Iceland’s Eyjafjallajokull volcano as it is erupting – take a few minutes to watch it and judge for yourself whether or not those objects are UFOs….

If you know of other unexplained mysteries of the world that would make excellent topics for us to cover on this site, please click the Contact button at the top of this site and get in touch with us.  We love to hear from and interact with our readers.  It is only because of our readers that we can do what we do.