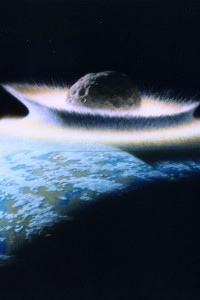 Do you remember the Hollywood blockbuster “Armageddon” in which Bruce Willis and Ben Affleck were sent to knock a massive asteroid off course before it could collide with the earth? Well, it turns out that is almost exactly what the head of Russia’s space agency, Anatoly Perminov, want to do with the massive asteroid known as Apophis. Perminov says that he wants Russia to send a specially designed spacecraft to knock the large Apophis asteroid off a potential collision course with Earth. Not implementing a plan while we still have time will be absolutely disastrous for humanity according to Perminov. In fact, Perminov says that he is convinced that the 885-foot-wide asteroid “will surely collide with the Earth in the 2030s”.

Perminov envisions that NASA, the European space agency and the Chinese space agency will all work together to eliminate the threat that Apophis poses.

Apophis was first discovered in 2004, and it is known that the asteroid will make a very close pass to earth in 2029, but astronomers do not believe that the asteroid has any chance of hitting the earth at that time.

However, Apophis is scheduled to come much closer to the earth in 2036, and there is significant debate among astronomers and scientists as to whether Apophis has a good chance to striking the earth at that time.

Perminov, for one, is totally convinced that Apophis represents a threat that needs to be addressed now….

“People’s lives are at stake. We should pay several hundred million dollars and build a system that would allow to prevent a collision, rather than sit and wait for it to happen and kill hundreds of thousands of people.”

However, Perminov believes that humanity does have the ability to avoid this future catastrophe if they will work together.

“Calculations show that it’s possible to create a special purpose spacecraft within the time we have,” the New York Daily News quotes Perminov as saying. “The threat of collision can be averted.”

In fact, Perminov is not the only one who is concerned about Apophis.

In July 2008, U.S. Representative Mark Udall directed NASA to track Apophis and to develop its own plan to protect the earth from this threat.

NASA has estimated that if Apophis did indeed hit the Earth, it could potentially cause a massive explosion (or churn up a huge tsunami) that could possibly kill millions of people.

Some are even wondering if Apophis or another asteroid just like it is mentioned in the book of Revelation in the Bible.

The second angel sounded his trumpet, and something like a huge mountain, all ablaze, was thrown into the sea.

A huge blazing mountain thrown into the sea?

How else would someone describe an asteroid 2000 years ago?

Not that we or anyone else is saying that Revelation 8:8 is definitely referring to Apophis.

It is just very interesting to note.

The truth is that in the end times there are going to be extraordinary things happening in the heavens.

There will be signs in the sun, moon and stars. On the earth, nations will be in anguish and perplexity at the roaring and tossing of the sea.

So will Apophis be a sign in the heavens?

Perhaps it is way too early to determine that.

But the fact that authorities around the globe are already so concerned about it is quite telling.

The truth is that we are moving into the most chaotic and yet most extraordinary time in all of human history.  It is certainly going to be an interesting ride.