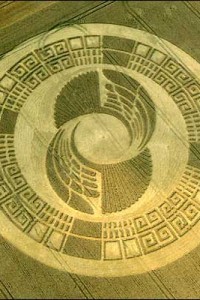 Someone is leaving elaborate crop circles all over the globe. Some of these crop circles cover great areas and are absolutely stunning in their precision. So what is going on here? It is one of the great mysteries of the world. Are these crop circles just elaborate hoaxes? If so, then why does nobody ever catch people making them? Are these crop circles connected with UFOs? Are aliens creating them? That is what a growing number of UFO researchers now believe. But why would aliens choose to leave messages for us using crops? Why wouldn’t they just communicate with us more directly? Sadly, at this point there are a whole lot more questions than there are answers. The phenomenon of crop circles is one of the great unexplained and unsolved mysteries of the world.

In particular, a bizarre series of crop circles has appeared all over the U.K.  in recent years, and some of them are so strange that they defy description. One example is posted below….

This “crop circle” is a 300 foot long hummingbird.

Who in the world has the time and resources to create a 300 foot long hummingbird picture in a barley field near the town of Wiltshire?

If this was done by a hoaxer, then how in the world could the hoaxer produce such an absolutely enormous work of art so quickly without anyone ever catching them?

It just does not make sense.

This particular crop circle was actually formed around a dew pond and that has left crop circle researchers scratching their heads.

Crop circle expert Karen Alexander had the following to say about this extraordinary crop circle….

“There are a myriad of theories about what these crop circles are trying to tell us, but at the moment we are no closer to knowing the truth it is incredibly exciting.”

Other crop circles seem to be trying to communicate an even more elaborate message.

This next crop circle shows the alignment of the planets in our solar system on December 21, 2012. Many crop circle researchers believe that by creating this crop circle, aliens are trying to tell us something about the Mayan Calendar which ends on that date….

So do aliens actually know about the Mayan calendar?

Is something actually going to happen on that date in 2012?

In any event, someone put a lot of effort into creating that crop circle.

The next crop circle depicted below is even more bizarre.

It was also discovered near the town of Wiltshire – where the 300 foot long hummingbird crop circle was discovered.

This incredibly complicated crop circle, which mesaures 150 feet in diameter, is apparently a coded image that represents the first 10 digits of pi (3.141592654).

Obviously someone with a great deal of intelligence created this…..

So why are such elaborate crop circles being created?

Rather than subsiding, the number of crop circles has increased around the globe in recent years.

They are getting more elaborate and more complex.

So is somebody out there trying to tell us something?

If so, exactly what are they trying to tell us?