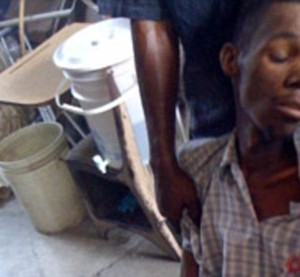 Can you imagine surviving for 27 days without food buried under a massive pile of rubble?  It is simply mind-boggling.  One of the greatest unsolved mysteries of this past week was how a 28-year-old man named Evan Muncie was able to be pulled alive from the rubble of a marketplace in Port-au-Prince nearly a month after the devastating earthquake in Haiti.  So how in the world could someone go that long without food and water?  Well, Muncie said that he was only able to survive because somebody in a white coat had occasionally brought him water while he was pinned down.

Certainly nobody human could have brought him water while he was pinned down under the rubble.

Of course the mainstream media reports are quick to dismiss Muncie’s account, claiming that he is “confused” or that he was “hallucinating”.

But how else could he have survived for that long without any water?

According to his doctor, Muncie had some wounds that needed treatment, but otherwise he was in good shape….

“He was emaciated. He hadn’t had anything in quite some time. He had open wounds that were festering on both of his feet.”

But other than that there were no major injuries, so it seems likely that Muncie will make a full recovery.

Thanks to the mystery benefactor in the white coat.