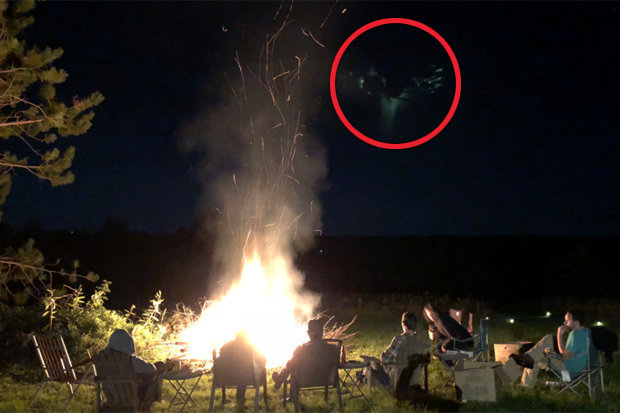 For quite a while, it seemed like there just were not too many UFO sightings, but in recent weeks the number of sightings in the United States appears to have risen dramatically.  Is there a reason why this is suddenly happening?  From coast to coast, reports are pouring in, and quite a few of them seem to be highly credible.  For example, when a camper in Wisconsin recently took a photo of his group huddled around a campfire at night, his iPhone captured “a strange vessel with glowing green lights” hovering above them…

The anonymous believer was on a trip to Maiden Rock, in the US state of Wisconsin, last week when they decided to take a snap of the group sat around the large camp fire.

But when they looked back over the iPhone pics they noticed a strange vessel with glowing green lights hovering above the group.

Nobody in the group noticed the UFO at the time.  Only after going back and looking at the photo did the photographer realize that something was there…

They added: “I was with eight other people. None of us saw it with our naked eye, but I’ve showed the photo to several of the other people that were there and we all agree it’s weird.

“I thought it looked like something from a sci-fi movie. It freaked me out.”

Interestingly, an “eerie ring of UFO lights” was captured on film by several witnesses in nearby Minnesota earlier in the month…

Could it be possible that there is some connection between these two sightings?

Even earlier in the month, a “UFO” was spotted above an NFL football game between the Oakland Raiders and the Los Angeles Rams…

“Within about 5-10 seconds I noticed some movement flying in front of the gold-coloured building on the right hand side of my TV screen.

“It was moving very fast, I thought maybe it was a fighter jet. I rewound the scene a few times and viewed it in slow motion, forward and reverse.

“It appeared to come from the upper portion of the screen, where there appears to be a parking lot.”

You can see a photograph of that “UFO” right here.

An extremely strange UFO sighting off of the California coastline has created quite an uproar over the past several days.  This UFO (or fleet of UFOs as some are calling it) was filmed by numerous people in both the United States and across the border in Mexico.  So we have multiple confirmations that the UFO sighting is real, and so far nobody has been able to explain it away.  In the end, it could be some type of really bizarre secret military project, but why won’t the military admit that if that is the case?  One video on YouTube captured footage of this unidentified anomaly for six minutes, but unfortunately it was so far away that we weren’t able to get a really good look at it.

And out on the east coast, a “giant square UFO” scared a man in North Carolina so badly that he literally could not sleep the night after he photographed it…

A 35-year-old man named Javion Hill created quite a stir when he posted a photograph of a giant square UFO that he witnessed hovering near Charlotte, North Carolina on his Facebook profile.  Hill claims that he took his photograph on the night of August 18th, and another witness has chimed in and said that he spotted a UFO in that area that night as well.  If this photograph is legitimate, the UFO is absolutely enormous, so it is quite understandable why Hill was so shaken up by this incident.  Before taking this photo, Hill said that he didn’t “necessarily believe in UFOs”, but he sure does now.

Last but certainly not least, a man living in the El Paso, Texas area recently filmed an enormous triangular-shaped craft flying in the skies above him…

Video footage has emerged of the moment one man may have captured something he shouldn’t while on the way to work.

The anonymous source was driving when he noticed something unusual in the skies above El Paso, Texas.

He pulled out his phone to record, and when he checked it out later he was left stunned by the footage.

It shows what appears to be a triangular-shaped aircraft hovering above him.

Many of the people who took these photographs didn’t even believe in UFOs before these encounters.

Is there a reason why UFO activity appears to be spiking right now?

Could it be possible that something big is about to happen?

At this moment we don’t have all the answers, but we will definitely keep watching…

The Last Days Warrior Summit is the premier online event of 2018 for Christians, conservatives and patriots.  It is a premium-members only international event that will empower and equip you with the knowledge and tools that you need as global events begin to escalate dramatically.  The speaker list includes Michael Snyder, Mike Adams, Dave Daubenmire, Ray Gano, Dr. Daniel Daves, Gary Kah, Justus Knight, Doug Krieger, Lyn Leahz, Laura Maxwell and many more. Full summit access will begin on October 25th, and if you would like to register for this unprecedented event you can do so right here.