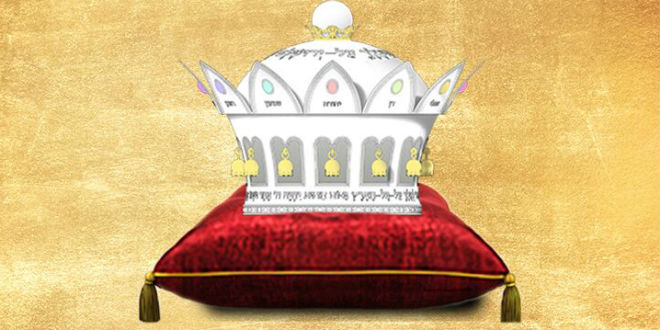 A Jewish rabbi that can trace his lineage directly back to King David has initiated a project to create a special golden crown for the Messiah.  According to Rabbi Yosef Berger, the coming of the Messiah is drawing near, and so physical preparations should be made for his arrival.  This is yet another example that shows how eager many Jewish people are for the messianic age to begin.  And Rabbi Berger actually believes that the creation of this crown will “hasten the arrival of the king”…

Rabbi Berger, a direct descendant of King David, explained that the founding of the State of Israel and the Six-Day War were overt miracles and that we are today living in the beginning of the messianic era. Creating such a crown, he said, and uniting the 70 nations of the world around the project, will hasten the arrival of the king.

“For 2,000 years, Israel has waited for the moshiach (messiah),” Rabbi Berger said. “As a symbol of our belief that this period of waiting has ended, we should prepare a crown, since the first act of the moshiach will be to restore the Davidic Dynasty, which will be visibly unlike any other kingship that has ever existed.”

I have never heard of anyone ever attempting to create a golden crown for the Messiah, and this may be the first time in history that it has ever been done.

But considering all of the preparations that have already been made for the Third Temple, Rabbi Berger insists that it only makes sense to do this as well.  The following comes from Breaking Israel News…

The rabbi noted that amazing efforts have been made to prepare for the Third Temple and all of the utensils stand ready, but no preparations have been made for the messiah who will build the Temple.

“Creating a crown for the king is unprecedented,” Rabbi Berger said. “When all 70 nations unite in an act of love expressly intended for the king in Jerusalem, this will surely be answered by Hashem.”

Unfortunately for Rabbi Berger, the Messiah isn’t going to need a crown, because the Bible says that He already has many crowns.  In The Rapture Verdict, I heavily quote Revelation chapter 19 which clearly states that the Lord Jesus Christ will be wearing many crowns on His head when He returns.  This is what Revelation 19:11-16 says in the Modern English Version…

11 I saw heaven opened. And there was a white horse. He who sat on it is called Faithful and True, and in righteousness He judges and wages war. 12 His eyes are like a flame of fire, and on His head are many crowns. He has a name written, that no one knows but He Himself. 13 He is clothed with a robe dipped in blood. His name is called The Word of God. 14 The armies in heaven, clothed in fine linen, white and clean, followed Him on white horses. 15 Out of His mouth proceeds a sharp sword, with which He may strike the nations. “He shall rule them with an iron scepter.”[a] He treads the winepress of the fury and wrath of God the Almighty. 16 On His robe and on His thigh He has a name written:

KING OF KINGS
AND LORD OF LORDS.

So we should definitely applaud Rabbi Berger for wanting to welcome the Messiah, but he doesn’t understand that the Messiah has already come once and will be returning again soon.

His name in Hebrew is “Yahshua”, and He is the King of Kings and the Lord of Lords.  Let us endeavor to share the truth with a lost and dying world while there is still time to do so.