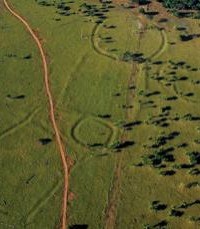 As advanced as we like to think that we are, the truth is that ancient civilizations are still being discovered today.  Just recently, researchers believe that they have found two previously unknown ancient civilizations – one on the sea floor of the Caribbean and the other deep in the forests of the Amazon.  The reality is that as scientists and researchers make additional discoveries, it just underlines the fact that there is much more to the ancient history of the earth than we have been led to believe.  The sea floors and the dense jungles throughout the earth contains some amazing mysteries.  As researchers delve into these mysteries, they are often learning that ancient humanity was much more advanced than most people would think.

In particular, these latest finds have got researchers and scientists very excited.

The very first photos from the Caribbean sea floor of what is believed to be the archaeological remains of an ancient civilization have been released.

The coordinates of the exact location are being guarded carefully for now, but the project’s leader insists that the large city found there could be thousands of years old.  He says that the city could possibly even pre-date the ancient Egyptian pyramids at Giza.

In fact, the leader of the project says that they have found what appears to be a tall, narrow pyramid.  That would be quite notable, as ancient pyramids have been discovered all over the globe in recent years.  It appears that civilizations all over the globe had a tendency towards building pyramidal structures even though they may have never had contact with one another.

It is also said that the team investigating the undersea city has also found large platform structures with small buildings on them.  They hope to have more findings to announce once they secure more funding.

A previously unknown ancient civilization has also recently been uncovered by deforestation in the Amazon.

According to one report, approximately 260 giant avenues, ditches and enclosures have been spotted from the air in a region straddling Brazil’s border with Bolivia.

Denise Schaan of the Federal University of Pará in Belém, Brazil, is quoted by New Scientist as saying this following about the pace of discoveries in this region….

“Every week we find new structures.”

Excavations in the area have unearthed ceramics, grinding stones and other signs of human habitation at some of the sites but not at others.

The thought is that some of the sites had purely ceremonial roles, while others may have had more common purposes.

Alex Chepstow-Lusty of the French Institute for Andean Studies in Lima, Peru is quoted by New Scientist as saying that researchers expect to find much more in the area….

“I have no doubt that this is only scratching the surface.”

So what does all of this mean?

It means that there is a whole lot more out there that is still waiting to be discovered.

Much about the ancient world still remains a mystery, and the truth is that as we learn more about our past, more about our future will likely be revealed.