Did you know that archaeologists sometimes find things that absolutely defy explanation?  But because they don’t fit into the “accepted version” of history they are not given coverage in the mainstream media.  Before a story about “science” will show up in our news, scientists must at least have a “theory” about how it fits into the generally accepted worldview which is being pushed in our schools and on our televisions.  There are, however, very “weird” discoveries that are being made all the time.  For example, the “giant skeletons” that keep popping up all over the place are one of the greatest mysteries of the world.  The photo on the left above is of bones from a “giant man” that was discovered near the city of Borjomi, Georgia (not the Georgia in the U.S.) in 1998.  A Russian news report about this discovery can be found here.  It is estimated that the “giant man” was about 9 to 10 feet tall and that the skull was about 3 times the size of a normal human skull. 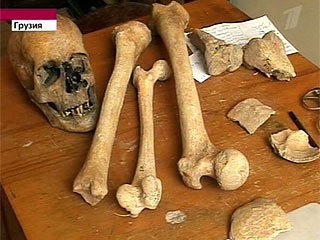 As we have written about previously, there is abundant evidence of ancient giants all over the globe.  But most people won’t even allow themselves to consider the evidence because it is just “too bizarre”.

For much more on all this, we would encourage you to check out the amazing research that Steve Quayle has done on ancient giants.

Once you learn the truth, it quickly becomes clear that giants did once walk the earth.

But shhhhhhhhhh – it doesn’t fit it with “the theory of evolution” and with the generally accepted version of history so you aren’t supposed to talk about it.