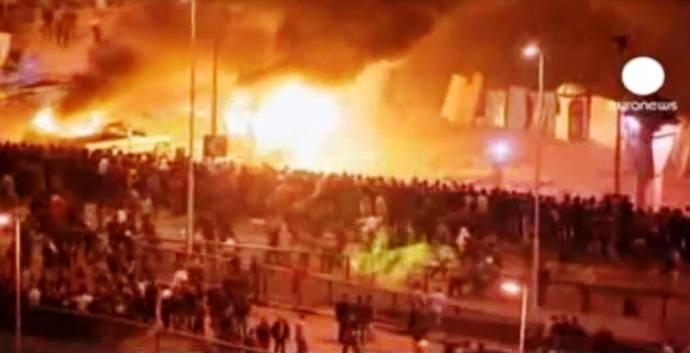 One of the greatest mysteries from this past year was the “ghost horse” that appeared in Tahrir Square during the Egyptian revolution.  One night while the protests in Egypt were in full swing, news footage captured an image of what seemed to be a ghost horse and rider galloping though the streets.  At the end of the video footage, the ghost horse rides off into the sky and disappears.  The video footage was so weird and so strange that it quickly attracted millions of views on YouTube.  So did a ghost horse really appear during the riots in Egypt?  If so, is this some kind of a “sign” to the rest of us?  Should we all be on the lookout for more paranormal phenomena at protests in the future?  Or is all of this just a giant hoax?  Well, some people out there have come up with some possible explanations, and 7 of the most popular explanations follow….

#1 The Fourth Horseman Of The Apocalypse Theory

“I looked, and there before me was a pale horse! Its rider was named Death, and Hades was following close behind him.”

Since the ghost horse of Egypt appeared to be pale green, this has caused many Christians to compare it to the pale horse of the book of Revelation.

But to me, that seems to be quite unlikely.  The truth is that we are not at that point on the Biblical timeline yet.

Some out there are speculating that the ghost horse of Egypt could have been an angel that was looking after the protesters.

Others are speculating that the ghost horse of Egypt actually might have been a demon that was stirring up trouble on the streets of Tahrir Square.

#4 An Egyptian Ghost From The Distant Past

Some of those that believe in ghosts say that the ghost horse of Egypt could have been a warrior ghost from the distant past that was stirred up by the violence in Tahrir Square.

There have been some that have tried to explain this whole thing away as just a reflection.  You can see one unconvincing video promoting this theory right here.

There are some that believe that this ghost horse was computer generated and was purposely put into the news footage.  But so far proponents of this theory have had a hard time explaining why anyone would want to do such a thing.

Some people have suggested that we are just imagining things and that there is no ghost horse there at all.  Instead, they believe that we are just misinterpreting a lens flare or a computer glitch.

Watch the video of the Egyptian ghost horse below and decide for yourself.  The good part starts at about the 1:20 mark of the video….

Unfortunately, this will probably remain one of the greatest mysteries of the world for quite some time.