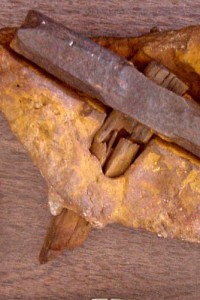 The mystery of the London Artifact always creates heated debates between creationists and Darwinists.  So what is it?  The London Artifact is an iron hammer that is surrounded by a solid mass of “cretaceous” rock. The handle of the hammer is made of wood and it is partially petrified. It was discovered in London, Texas.  In June 1936, Max and Emma Hahn were walking along Red Creek, near their home in London, Texas when they spotted a rock nodule with a piece of wood sticking out of it. Some time later their son George broke it open, and this revealed a metal hammer in the center of the rock nodule to which the wooden handle was attached.  The Hahns filed the hammer to see if it was really metal, and the spot that they filed has not rusted since that time, even though it is about fifty years later.  So what are we to make of this extraordinary fossil?

Well, tests have shown that the hammer is actually iron.  The hammer contains 96% iron, 2.6% chlorine, and 0.74% sulfur. There are no bubbles in the metal of the hammer at all.

Now how in the world is THAT possible?

The truth is that evolutionists and creationists will continue to fight about this artifact until Jesus comes back.

But for those who choose to take an objective look at things, the reality is that this is a really extraordinary “out of place” fossil.

Could this actually be a hammer from the world that existed before Noah’s flood?

Nobody knows for certain.  It remains one of the world’s great mysteries…. 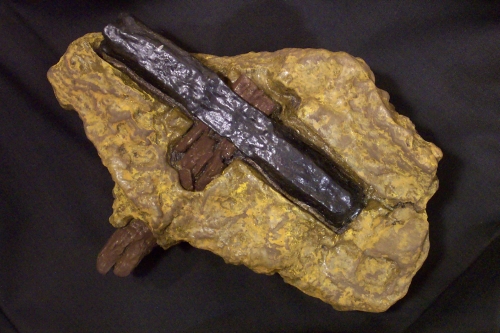