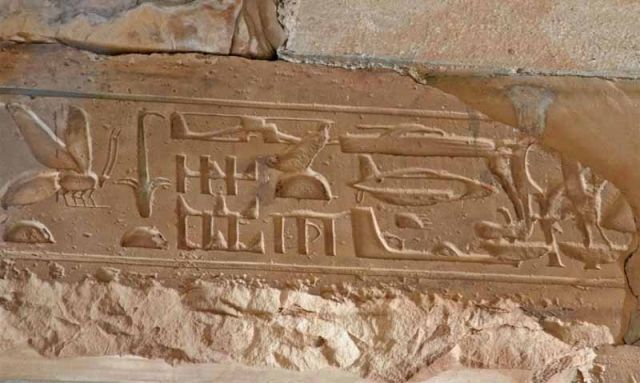 The history of our planet is far more complex than most people would dare to imagine.  According to the commonly accepted version of history that is taught in high schools and colleges all over the United States, ancient man was a very simple creature with extremely limited knowledge.  Unfortunately for those that promote this flawed version of history, archaeologists keep digging up stuff that directly contradicts it.  The truth is that there is a tremendous amount of evidence of great intellectual achievement in the ancient world.  For example, just consider the Great Pyramid of Giza.  It is a true technological marvel.  It is such a massive structure built with such extraordinary precision that modern technology is only just now starting to catch up with it.  We think that we could possibly build a similar structure today if we wanted to, but modern man has never actually constructed anything like it.  And as you will see below, the Great Pyramid of Giza is far from the only example of advanced technology in the ancient world that we find in Egypt.

Posted below is a photograph of a wall in an ancient Egyptian temple at Abydos.  Look at the hieroglyphics very carefully.

Do you see anything strange? 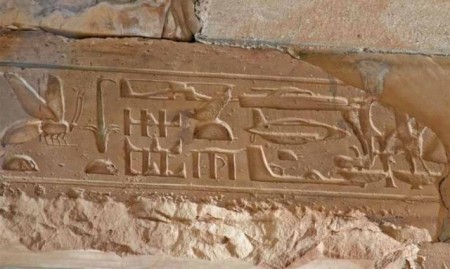 Researcher Lyn Leahz wrote about these incredibly bizarre hieroglyphics the other day.  The following is what she had to say about them…

Decorating an Egyptian temple wall at Abydos are strange hieroglyphics which depict what appears to be modern day aircraft. This finding has caused much controversy among Egyptologists and archaeologists who are not sure what to think. How could people 2-3,000 years ago possibly have known about modern-day aircraft?

When Dr. Ruth Hover and her husband took a trip to the pyramids and temples of Egypt, they were shocked when they discovered, in the temple at Abydos, hieroglyphics depicting modern-day aircraft. She photographed a wall panel in a section where an overlaying panel with Egyptian hieroglyphics crumbled and fell, revealing an older panel beneath it. This older panel, shown above, contains images of what appear to be modern-day technology—a helicopter, a submarine, a glider, and another unknown type of aircraft (some believe resemble the Hindenburg).

So how do those promoting the commonly accepted version of history explain this?

In the video shared below, Lyn Leahz shares even more about these hieroglyphics and discusses additional “out of place artifacts” around the globe…

There is also mounting evidence that mankind had knowledge of dinosaurs in ancient times.

Posted below is a photo of an ancient engraving on a Buddhist temple in Cambodia known as the Ta Prohm Stegosaurus.  According to the commonly accepted version of history, such an engraving should be absolutely impossible because dinosaurs died out millions of years ago and modern scientists only started digging them up a couple hundred years ago.  And yet this engraving is there… 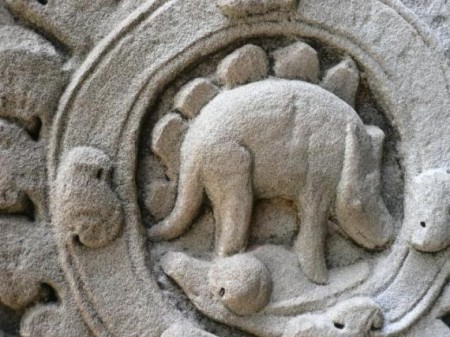 According to archaeologists, this temple in Cambodia is approximately 800 years old…

Deep in the jungles of Cambodia are ornate temples and palaces from the Khmer civilization. One such temple, Ta Prohm, abounds with stone statues and reliefs. Almost every square inch of the gray sandstone is covered with ornate, detailed carvings. These depict familiar animals like monkeys, deer, water buffalo, parrots, and lizards. However, one column contains an intricate carving of a stegosaur-like creature. But how could artisans decorating an 800 year old Buddhist temple know what a dinosaur looked like? Western science only began assembling dinosaurs skeletons in the past two centuries.

Another unexpected place where we find “ancient dinosaur art” is on the ancient Ica Stones that were discovered down in Peru.  These stones were originally found by the Spanish in 1535, and Spanish explorers sent some of these stones back to Spain in 1562.

The art on many of these stones is extremely beautiful, but what makes them extremely controversial is the fact that many of them appear to contain clear depictions of dinosaurs.  Here is one example… 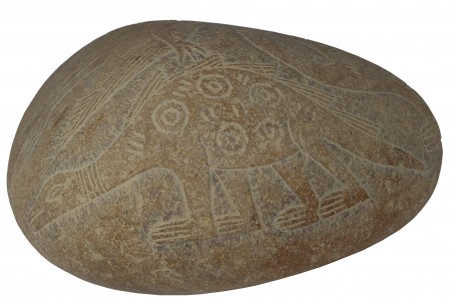 And here is another example.  If you look closely at this one, you can see what very much looks like a Triceratops… 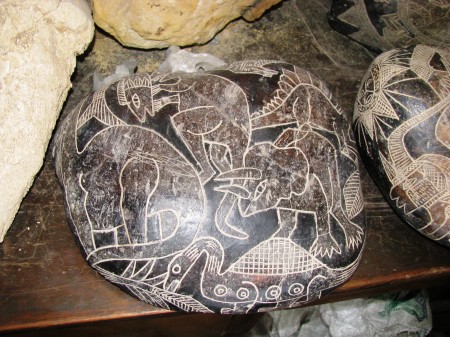 Once again, those promoting the commonly accepted version of history are at a loss to explain this.  Most commonly, they attempt to explain this phenomenon away as a hoax because locals did start creating fake “Ica stones” in recent years once they discovered that tourists wanted to buy them.

But the Ica stones that are considered to be authentic contain some remarkable details.  In fact, much of the anatomical knowledge about dinosaurs depicted on these stones was only discovered by modern scientists just very recently…

Other items of anatomical accuracy that attest to the authenticity of these Ica Stone depictions include the positioning of the tail and legs. Early critics said the Ica Stones were fakes, in part because their tails were sticking out while walking. Paleontologists in the 1960s were confident that dinosaurs dragged their tails. The paleontologists were wrong and the Ica Stones were right.  Scientists now believe dinosaurs held their massive tails off the ground while walking, because there are no drag marks on dinosaur trackways.  The dinosaurs on the Ica Stones are depicted standing upright, rather than with legs splayed out in a lizard-like position. That, according to dinosaur experts, is “dead on” accurate.

Of course the Ica Stones are just one of the incredible examples of ancient dinosaur art that have been discovered all over the world.  For many, many more examples of this phenomenon, just check out the article that you can find right here.

Anyone that attempts to convince you that humans that lived thousands of years ago were bumbling dolts that were lucky to build mud huts and cover their genitals with grass skirts is lying to you.

The truth is that human history is incredibly complex.  There are monolithic structures all over the planet that are still standing after thousands of years that remind all of us that great civilizations with amazing technologies once thrived.

And there is actually evidence that modern humans are actually getting dumber.  A Stanford University biology professor recently published a work in which he expressed his conclusion that humans have been getting dumber for thousands of years.

Also, Dr. John Sanford of Cornell University has conducted groundbreaking research that demonstrates conclusively that the human genome is steadily degenerating and is eventually heading toward extinction.

So perhaps we should not think of ourselves as so superior to ancient humanity.  The reality is that they may have been physically and mentally superior to us in many ways.